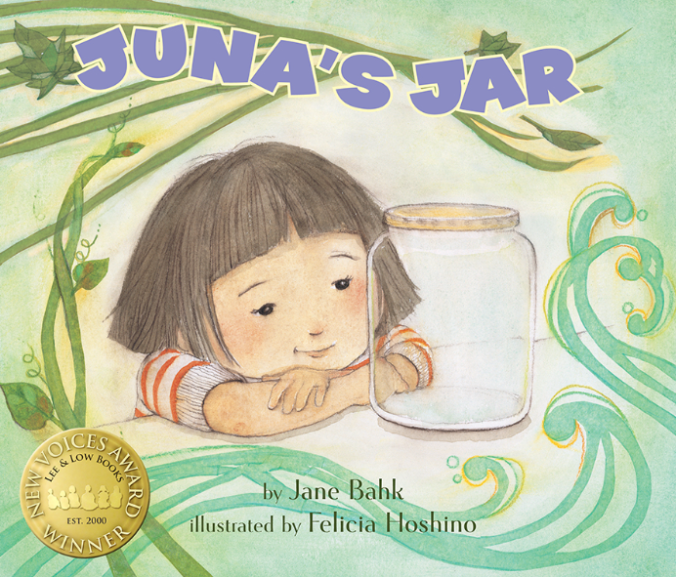 Juna’s Jar by Jane Bahk with art by Felicia Hoshino copyright LEE & LOW Books January 2015.  Let me tell you why this book would be the perfect addition to your petites shelf.  First of all the illustrations are delightful, the story is so real and touching.  It is about a young girl named Juna, her family has a large jar of kimchi in their fridge and when the kimchi is all gone she sometimes get to keep the jar.  Do you know any petites who would like to keep a jar like this?  I certainly do.

Juna is also a girl who loves adventures especially ones with her best friend Hector.  They are perfect together looking at books and collecting things to put into the jar.  Sadly, one day Juna goes to get Hector for another adventure and learns that he has moved from his grandmother’s house to a new house far away.

Juna is devastated that she didn’t even get a chance to say goodbye.  Her older brother, Minho, tries to cheer her up by buying her a fish to put into her special jar.  What is so unique and special is that this book has so perfectly captured what it is to be in a petites world to feel that unfairness and disappointment.  But more so in the beauty that is a child’s  imagination and dreams.

As Juna goes on these magical adventures inspired by whatever is in her special jar, she searches in her dreams for her dear friend Hector.  One night she is able to check in on Hector and realizes that he is happy and that he too has a special jar.  The story ends just as you hoped it would with Juna wishing of what to put into her jar when she unexpectedly meets a new friend and we can only assume the adventures continue.

Something that makes Juna’s Jar stand out from other books is that it is so relatable to so many families.  Many children live in apartments and many live with extended family of some sort this book honors that.  Another aspect that I believe is so crucial is that nature can be found anywhere – even in an urban setting.  This book also honors the fact that to have a wonderful time you don’t need a lot of “stuff”, you can be outside and explore your surroundings all you need is a pal and a jar.  This book is relatable to so many petites.  I truly believe that this book should be in all school libraries, because every petite deserves to have the opportunity to relate to the books that are available to read in their school libraries.  #WeNeedDiverseBooks

The one thing you will most likely need to do is find a jar because as soon as you read this story your petites will want to embark on their own adventures.